Neuroinflammation has been identified as an important factor in many pathologies of the nervous system like neurodegenerative diseases (including Parkinson’s disease, Alzheimer’s disease and other forms of dementias), chronic pain or autoimmune diseases, such as multiple sclerosis (MS). However, the causal or consequential role of neuroinflammation still remains unclear. These diseases impose a heavy burden on society and are a major cause for morbidity, mortality and impaired quality of life of afflicted patients. 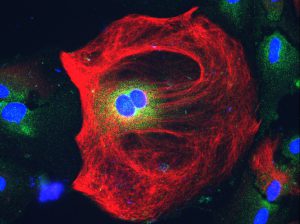 Having established alemtuzumab as a highly effective anti-inflammatory therapy for early relapsing multiple sclerosis, we are now tackling the post-inflammatory phase of the disease by testing a novel remyelinating therapy, a licensed retinoid X receptor gamma agonist. 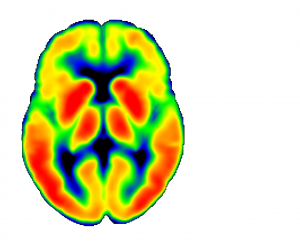 A PET image of a brain from a patient with Alzheimer’s disease. The radioactive tracer 18F-AV-1451 was used as a biomarker for the protein tau.

We have shown that people taking anti-inflammatory drugs are less prone to dementia associated with Parkinson’s disease, and that Parkinson’s disease is associated with a pro-inflammatory serum cytokine profile and abnormal peripheral B lymphocyte phenotype. We will now conduct the first placebo-controlled trial of an immunosuppressant in people with established Parkinson’s disease to prevent cognitive impairment.
In recent years, in partnership we have shown that ~7% of people with early psychosis have serum antibodies directed against neuronal membrane targets, and that they seem to respond to immunotherapy in open-label studies. This underpins a randomised placebo-controlled national multi-centre trial to test this innovative treatment approach for the first time.
We are committed to advancing our understanding of how inflammation contributes to the causes of chronic neurological diseases, and ambitious to conduct both fundamental science as well as start innovative therapy trials across all diseases of the nervous system involving inflammation.